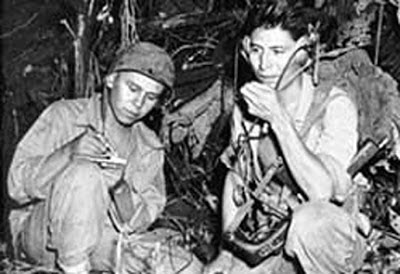 Bile Study Verses
I Corinthians 14:33
For God is not the author of confusion, but of peace, as in all churches of the saints. (NKJV)

II Timothy 1:7
For God has not given us a spirit of fear, but of power and of love and of a sound mind. (NKJV)

Thoughts
Missionary son and World War I veteran Phil Johnston authored the Marine Navajo code talkers' communication system. It's success was based upon the complexity of the Navajo language, the alphabet and native origin symbols that did not exist on paper except for an incomplete Navajo dictionary, Navajo had been passed down generation-by-generation verbally, and the tribe had not been infiltrated by German art dealers, students, and anthropologists studying  various tribal dialect.
The participants were from a small geographical reservation within mostly Arizona, Colorado, New Mexico, and Utah who were highly educated in the English language and possessed first language knowledge of the written and oral Navajo.
Examples of some words used:
Marine challenges to overcome were:
Benefits of Navajo code talkers:
375 to 420 Navajos served as code talkers returning home without parades or fanfare since they were sworn to secrecy about the existence of the code should it ever have to used again which was resurrected in the Korean and Vietnam wars. "Honoring the Code Talkers Act" became law on December 21, 2000.   Awards of  the Congressional Gold Medal to each of the original 29 Navajo code talkers and the Congressional Silver Medal to each man who later qualified as a code talker.

Sportsmen's Devotional would like to thank the remaining original code talker, Cpl. Chester Nez, for his excellent and  necessary service in saving hundreds if not thousands of lives. Cpl. Nez has also been an avid deer hunter and sportsman. Again thank you Cpl. Nez!!!
(Jo Q)

Action Point
As soldiers for Christ we must remember our God is not the author of confusion. He has given each of us that are walking in His Light a spirit of power, a spirit of  love, and a sound mind.

We could all learn from the Marine Navajo code talkers. They did their job so well in secrecy and humility not striving for human recognition.
Sportsmen's Tip of the Day
A little know fact, some of the largest mule deer in the North America live on the Navajo Reservation. One needs to accompanied by a Navajo guide if you can draw this precious tag. Contact Navajo Fish and Wildlife for more information  at  http://www.navajofishandwildlife.org/.
Posted by Sportsmen's Devotional at 1:09 PM