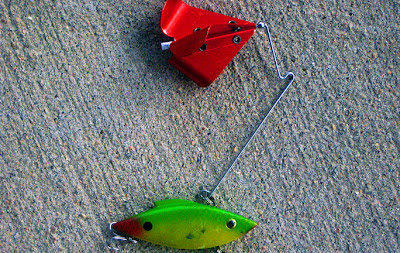 Bible Study Verse
Do not conform to the pattern of this world, but be transformed by the renewing of your mind. Then you will be able to test and approve what God's will is - His good, pleasing and perfect will. For by the grace given me I say to every one of you: Do not think of yourself more highly than you ought, but rather think of yourself with sober judgment, in accordance with the faith God has distributed to each of you. (NIV)

Thoughts
Somebody is always coming up with a new lure design, a different rigging for a bait or lure, a better fishing reel, tougher line, or better fishing electronics. . . something to make catching fish easier.

The latest new rigging touted to catch more largemouth bass is the "Umbrella Rig," although I understand anglers on the East coast have been using a variation of the Umbrellas to catch stripers for a long time.

Several years ago a bass angler introduced me to his latest lure creation. He had taken a buzz bait, removed the skirt and hook, and then added a Rat L Trap to where the original buzz bait skirt and hook were located.

Did it catch fish? I don't know. I have yet to get it wet. He swore it was great bass catcher.

Probably the number one reason I never tried it was because I was catching bass regularly with my tried and true lures. Why spend time trying something new when the present lures are working great.
(Tom B)

Action Point
Conform to the latest trend, or stick with what you know is true?

Exodus 23:2a says, "Do not follow the crowd in doing wrong," (NIV). Deuteronomy 12:30 says, "And after they have been destroyed before you, be careful not to be ensnared by inquiring about their gods, saying, "How do these nations serve their gods? We will do the same," (NIV).

I really like the Message's translation of II Kings 17:14-15, "But they wouldn't listen. If anything, they were even more bullheaded than their stubborn ancestors, if that's possible. They were contemptuous of His instructions, the solemn and holy covenant He had made with their ancestors, and of His repeated reminders and warnings. They lived a "nothing" life and became "nothings"-just like the pagan peoples all around them. They were well-warned: God said, 'Don't!' but they did it anyway," (MSG).
Remember the laws of God, the Ten Commandments. Don't add to them; don't delete anything from them; and don't reinterpret them to fit the changing world we live in.

What about fishing lures . . . conform or try some new idea or bait? Try them out and see if they catch fish, as long as they don't break the laws of your state or country. Don't break established laws.

Sportsmen's Tip of the Day
Some recent tips anglers have posted on different internet forums for modifying buzz baits:

Posted by Sportsmen's Devotional at 10:45 AM