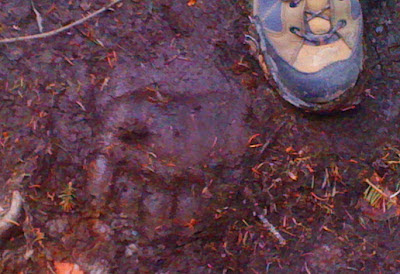 Bible Study Verse
Matthew 26:41
"Watch and pray so that you will not fall into temptation. The spirit is willing, but the flesh is weak." (NIV)

Thoughts
My family and I were backpacking a stretch of trail where there had been problems with an "unfriendly bear". This black had been wreaking havoc at one particular campsite that we had been encouraged to forego staying at. However, due to an injury my wife sustained along the trail, we had to stop and stay.

Prior to us staying at this campsite, we had spoken with a group of guys who had also just stayed at this particular site the night before. They had experienced no problems. That was good news to hear!

When we arrived at the cove, I had everyone working on setting up camp. While they did this, I went down to the water's edge to refill our water bottles. As I walked down to the shore of Lake Superior, I discovered sizable tracks from a bear that had walked along the water's edge. Apparently, the bear had been there between the last group and our arrival, a difference of one to two hours.

Although the other group had not had a problem, my guard was back on high alert because of the tracks. So no one else would be scared, I erased the bear tracks in the wet sand with my own footprints. I didn't want anyone else to see what I had seen.
(Dave M)
Action Point
One of the greatest attacks on Christian men today occurs via the internet with pornographic sites. With just a few quick clicks of the key board, a fella can find himself viewing something that he was never supposed to see. The problem is that these images stick in the head and lead to games of the mind.

Someone who is trapped by this particular sin may be able to erase the tracks so that no one else knows where they've been on the computer. But, that doesn't mean you weren't there. You've still placed yourself in a dangerous position. You don't know what the consequences will be.

As food for thought, my kids later told me that they had seen the bear tracks too. They knew in spite of my cover up! Covering the tracks doesn't make it right; you've placed yourself and family in danger!!!

Read I Corinthians 10:13, "No temptation has seized you except what is common to man. And God is faithful; He will not let you be tempted beyond what you can bear. But when you are tempted, He will also provide a way out so that you can stand up under it," (NIV). Next ask Him for forgiveness and wisdom in this area. Follow Romans 13:14, "Rather, clothe yourselves with the Lord Jesus Christ, and do not think about how to gratify the desires of the sinful nature" (NIV). Seek Biblical counsel and prayer, and change your computer usage today.

Remember HE WILL HONOR your ODEDIENCE TO HIS WORD. Meditate on HIS WORD DAY AND NIGHT.

Sportsmen's Tip of the Day
Satellite phones are a great way to have a connection to the "outside" world while you are deep in the wild. If you ever have a serious problem, it's an option for getting help.
Posted by Sportsmen's Devotional at 9:22 AM