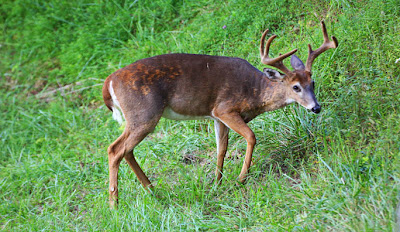 Bible Study Verse
Nehemiah 9:17
They refused to listen and failed to remember the miracles you performed among them. They became stiff-necked and in their rebellion appointed a leader in order to return to their slavery. But you are a forgiving God, gracious and compassionate, slow to anger and abounding in love. Therefore you did not desert them. (NIV)
Thoughts
I was out tracking a buck after dark with my brother-in-law. The buck had been shot close to dark. When I got down out of my tree stand, I marked the beginning of the blood trail and had a general sense of where he took off to.

We had a flashlight and a propane lantern to light the way. As we found blood, we marked the spot with toilet paper. It would enable us to find our way out when we were done. After tracking this deer a hundred yards or so, I flashed my light up and around to see if I could see the animal. Sure enough, we found him laying 30 yards away from where we stood.

In our excitement, we rushed over to the buck and didn't mark the last little bit of the trail. As fate would have it, our lantern ran out of fuel while gutting the deer. We were down to only the flashlight.

As we went to head back out with the deer, we lost our bearings. Even though the trail was close, we just couldn't find the last piece of toilet paper to get us started back on the trail. We were lost. Fortunately, after a couple of hours of staggering around in the dark, we finally picked up the trail.
(Dave M)

Action Point
I don't know many people who wake up in the morning and say, "Today, I'm going to sin."
Sin often occurs much more subtly than intentionally planning to participate in it. There is often a gradual path that leads to a life of sin, little decisions that we make thinking that our choices really don't matter that much. Soon though, those little decisions add up and they've taken us down a path that we never really intended on traveling. In the end, we end up spiritually lost - looking for the way back.

If you are a Christian and find yourself today in a place that you never intended on being in due to a sin issue, my suggestion is to go back to the last spiritual marker where you can remember things were good between God and you. You'll be able to quickly identify what took you down the "wrong path".

Ask God to forgive you for allowing sin(s) into your life. After finding your way back to Him, enjoy being home in the warmth of His presence.

Sportsmen's Tip of the Day
Propane lanterns are great for tracking. The blood illuminates in the lantern light. Marking your way with toilet paper is also a great way to mark your trail. Just don't forget to mark it all the way to the animal.
Posted by Sportsmen's Devotional at 3:46 PM