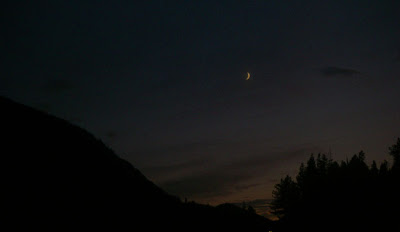 Bible Study Verses
II Chronicles 20:2-4
Some men came and told Jehoshaphat, "A great multitude is coming against you from Edom, from beyond the sea; and, behold, they are in Hazazon-tamar"  Then Jehoshaphat was afraid and set his face to seek the Lord, and proclaimed a fast throughout all Judah. And Judah assembled to seek help from the Lord; from all the cities of Judah they came to seek the Lord.
(ESV)

Thoughts
Often, as a young boy, I would find myself sitting in the middle of a pitch black night, waiting for my father to return after a late afternoon hunt.

The silence of the woods after dark was quite frightening for this young hunter and minutes seemed like hours. The noise of an owl or the distant cry of a coyote would cause the hair on my arms to stand on end and would send a chill rippling through my body. To say that I was afraid was an understatement!!!
(Mike T)

Action Point
My first response was always to go to the Lord in prayer. In fact, I was accustomed to praying out loud to help drown out the silence of the night.

Jehoshaphat, the king of Judah, was under siege and the men of the Moabites, Ammonites, and some of the Meunites had gathered to take him and his army out. He was afraid and he had every reason to feel this way, but his response is worth talking about . . .

He began to fast and sought out the Lord for help. Not only did the king do this, but all of the cities of Judah got on their knees and prayed for God's deliverance.

When you are fearful what is your response? When your church is faced with a daunting obstacle what is the congregations response? Do you take matters into your own hands or do you get on your knees and pray. Have you or your church ever considered a fast?

Sportsmen's Tip of the Day
Hiking or walking out of the woods at dark can be dangerous. Always carry a flashlight or a headlamp and it never hurts to have a spare set of batteries. You never know what circumstances may call for you to spend a longer time in the woods than you prefer.
Posted by Sportsmen's Devotional at 6:34 PM